I drove through the French Pyrenees with Bas at the end of the summer 2017. As we both really love hiking and the outdoors, we’d thought to give hiking in the Pyrenees a try! And man, it was worth it 😀 I read about the Vallee du Louron and the area around it in my Lonely Planet, and we were excited to explore the area.

The Pyrenees: the basics

So first, the basics 😀 The Pyrenees are a range of mountains that form a natural border between France and Spain. Tiny Andorra is basically sandwiched in between. 🙂 On the Spanish side the Pyrenees are part of the provinces (from East to West): Girona, Barcelona, Lleida, Huesca, Navarra and Gipuzkoa. On the French side the Pyrenees fall under the following départements (from East to West): Pyrénées-Orientales, Aude, Ariège, Haute-Garonne, Hautes-Pyrénées and Pyrénées-Atlantiques. Basically: the Cote D’Azur on one side, and surf on the other side. On either side: sunshine, beach and good food 😀

An interesting fact about the Pyrenees is that they are actually older than the Alps. Although they don’t contain any great lakes like those in the Alps, they do contain many large mountain torrents with create amazing waterfalls. Obviously there are no shortages of choice when it comes to deciding where in the Pyrenees you want to visit! But the more choice, the more difficult it is 🙂 In summer the Pyrenees are definitely a stunning area to explore. You can go hiking in the Pyrenees or you can go cycling and conquer amazing cols in the Pyrenees like Col du Tourmalet and Col D’Aspin. Another great thing to do is to go spot wildlife or just enjoy the valleys and their beautiful lakes. There are also tons of ski resorts to spend the winter days.

In any case, if you decide to explore the Pyrenees by foot, bycicle, car or any other means of transportation, make sure you are prepared. The Pyrenees are high mountain ranges in which the weather can turn very quickly. For example, if you go hiking like we did, make sure you are carrying essential hiking equipment. Good shoes, enough water and food are crucial! Invest in these items, or make a wishlist for your favourite hiking gear for birthdays or christmas 🙂 Feeling on top of the world in the beautiful Pyrenees!

Most areas in the Pyrenees are quite well accessible by car (although you will need chains for your tires in Winter) and public transport. You can use airport shuttle services during the high-season (winter) to get from Lourdes Pyrenees airport if you are flying in. There are also regular trains from Paris to Lourdes. There are also regular buses from the town of Arreau to the Louron Valley, which is where we visited for our hike!

Our roadtrip through the Pyrenees

We came from the French coast at Perpignan, drove straight through the Pyrenees to end up in the Hautes-Pyrenees. Most people know this area because of the city of Lourdes (which gets millions of visitors each year) and the cute town of Arreau (both of which we unfortunately skipped due to the weather conditions). After visiting the beautiful area described below, we drove past Pau to make our way up to Bordeaux and the Bay of Arcachon.

Loudenvielle in the Vallée du Louron

We were looking for some good hiking spots in the area we were in. Because we didn’t really know where to look, we looked up a campsite with good hiking possibilities. This way, we found a cheap campsite in Loudenvielle (Camping Pene Blanche). The previous nights we had stayed at some free parking spots in France. But we were SO cold at the high altitudes that we were happy to get to a campsite. 🙂 And that’s how we ended up in the beautiful small town of Loudenvielle in the Vallee du Louron.

The Vallée du Louron is a valley in the Pyrenees located within the department of Hautes-Pyrenees. The high valley was formed by a glacier and is dotted with many lakes. The town of Loudenvielle is located at the bottom of the valley and is right at a stunning lake. There is much nature and wildlife to be found in the area! The valley is home to some rare native species’ such as isard (a type of goat), the bearded vulture, the tawny vulture and the desman (a kind of aquatic rat).

Loudenvielle istself is a popular resort featuring a lake, thermal spa, campsite and waterpark. It is also the closest town to the Peyragudes and Val-Louron ski-resorts. The town offers a lot of winter activities such as skiing, snowboarding, dog-sledding, shooting with bow or spear, snowshoeing and even ice cascade climbing if you have the skills and daring! There are a couple of Intersport and other sports shops open, even in summer and September (when we were there). In summer there are of course lots of hiking routes and trails so that you can enjoy the stunning scenery and perhaps spot some native wildlife. There are also opportunities for paragliding and hang-gliding in the Vallée du Louron, both during Winter and Summer.

As we were there in the end of the summer, hiking it was 😀 You can see the lake of Loudenvielle from many hikes

From our campsite, it was a short walk into the town. The tourist office has limited opening hours (like many French shops and campsites) but we were able to grab a couple of maps when went to the supermarket in the morning 🙂

We looked for a hike starting in Loudenvielle, so we didn’t have to drive somewhere before the hike would start. As you can see on the below map, there are plenty of hiking opportunities in the area! 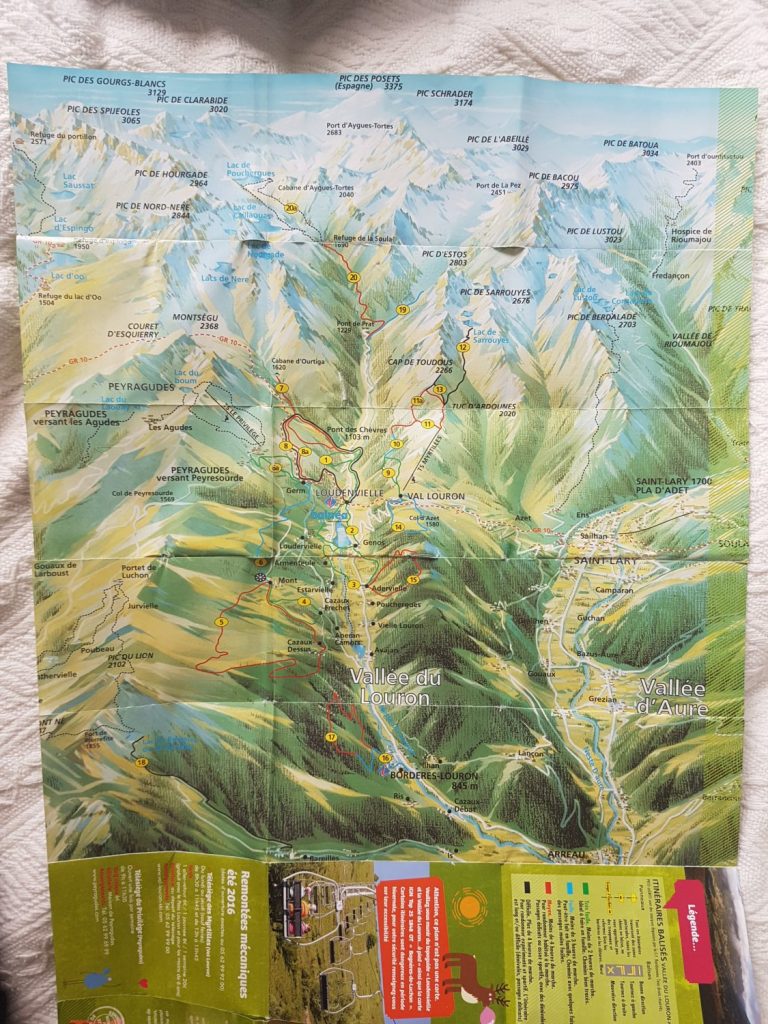 We opted for one of the longer hikes on the list: Route 8 of about 4:30 hrs! We saw there was also the option to extend the hike with Hike number 7, which was nice in case we wanted to stay longer 🙂 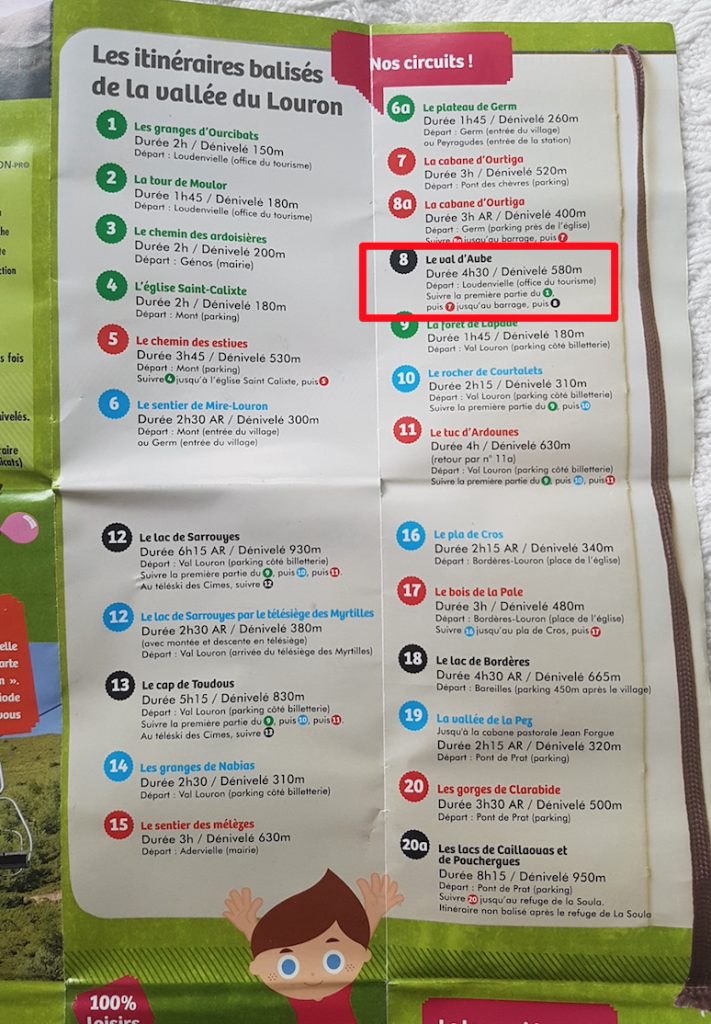 Sometimes it’s very hard to find the start of the hike, but in this case it was actually perfect! Right behind the tourist office there were the first signs already. Good! A clear start of the hike 🙂

And also along the way, the trail was very well marked! No matter how well the trail was marked, we still had some road blocks on the way 😉 Before heading into some areas of the trail, there were already some signs that warned for cows. Hiking in the Pyrenees means walking through meadows where cattle can roam around freely. This definitely adds to the atmosphere, but makes it scary sometimes if they are in the middle of the road. They just stare at you, and don’t move at all! Especially when there were some baby cows, things got a bit angry. Usually, we would look for a piece of land a bit more up so we could hide a bit and eventually, they would walk by! The views of this hike were incredible. It was such a clear day, lush green fields and trees and the mountains.. just amazing! I would definitely come here again! The track was, next to well marked, very clear and visible

We had ordered a pizza at the supermarket, to be picked up at 7pm. We were right on track, even after doing the detour of route number 7 (see up) which took about 1,5 roundtrip. But, we had one last obstacle to deal with 🙂 See him around the corner? Just one last obstacle on our way home…

Once this guy got out of the way, all was good and we only had to descend. Doing this hiking trip counter-clockwise (we went right on the loop, instead of left) made sure we were in the sun all day long. This was great because it was already early September!

Coming back down in the village, we were right in time for our pizza 🙂 We snuggled up under our blanket in the van, ate pizza and watched a movie. Amazing day, amazing hike!

I hope I have inspired you to go hiking in the Pyrenees! There are so many other beautiful areas in this mountain range. Do you know any other great routes? Please share 🙂