I simply love exploring Spain! Yes, I do love Barcelona, and Madrid is growing on me. But when I explore smaller cities filled with tapas, vino tinto and sunshine and explore less touristy corners of the country, I cannot stop smiling. These thoughts lead me to the city of Almeria, located in the southeast of Spain, right on the Mediterranean coast. Almeria is not a city that’s standard on everyone’s list of things to do in Spain. It does however makes for a great day-trip or even weekend break! So think about visiting Almería next time you are in the Murcia or making a roadtrip through Andalucía! 🙂 Time to explore all the great things to do in Almeria!

The city of Almeria in Spain

Almeria is a city full of history! But, it did not always have the easiest of times and the city has been ruled by many a chief – which makes it very interesting to explore! During the 10th and 11th centuries Almería was part of the caliphate of Cordoba. In those times, the city got its wealth from the trade of textiles, especially silk. But over time, Almería suffered many sieges from both Christian and Muslim rulers, and eventually fell under Christian rule. Since then, the city has been devastated by both an earthquake and shelling during the Spanish civil war. You can find a great timeline of Almeria’s history here.

But luckily, much of the old city either survived or was restored and these days. Almeria is rising as a tourist destination and also has been able to rebuild its economy around vegetable production – the region supplies vegetables to many parts of Europe. Due to the different religions that have held the city in its past, there are many interesting historic sites to visit, both Moorish and Christian.

The most striking of all things to do inAlmeria is definitely the Alcazaba – the second largest Muslim historic site in Andalucia (second to only Granada’s Alhambra).

The Alcazaba of Almería

One of the most popular and most visited sites in Almería is the Alcazaba. And deservedly so. Out of all the things to do in Almeria, this was by far my favourite one! The beautiful old city of Almeria even got its name from this citadel. The name derives from the Arabic word for watchtower: Al-Mari’yah. The word Alcazaba itself comes from the Arabic word al-qasbah, which means a walled fortification within a city.

The construction of the Alcazaba fortress began in the 10th century as a defensive citadel. It contained military compounds as well as public baths, a mosque, houses and a palace that housed the Moorish Kings when they were in the city. The Alcazaba was extended with new areas and features by almost each of its rulers.

While the Alhambra in Granada might be more famous, the Alcazaba of Almeria is actually the largest Muslim fortress in both Spain and Europe. Apparently the Alhambra is actually bigger, but it’s thought of as more of a palace than a fortress. 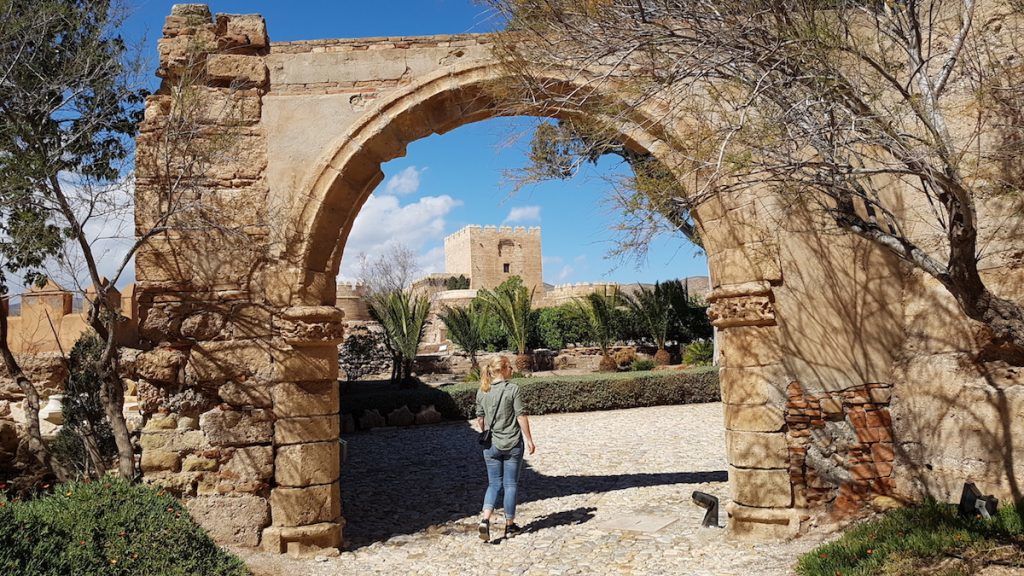 Within the Alcazaba, you can visit many different areas. You can climb the walls, enjoy shady courtyards and the gardens and explore the bathing areas. I spent about 2 hours in the Alcazaba and was stunned by all the details and the views around. If you do not have too much time to do things in Almeria, I would definitely put this one on top of the list! 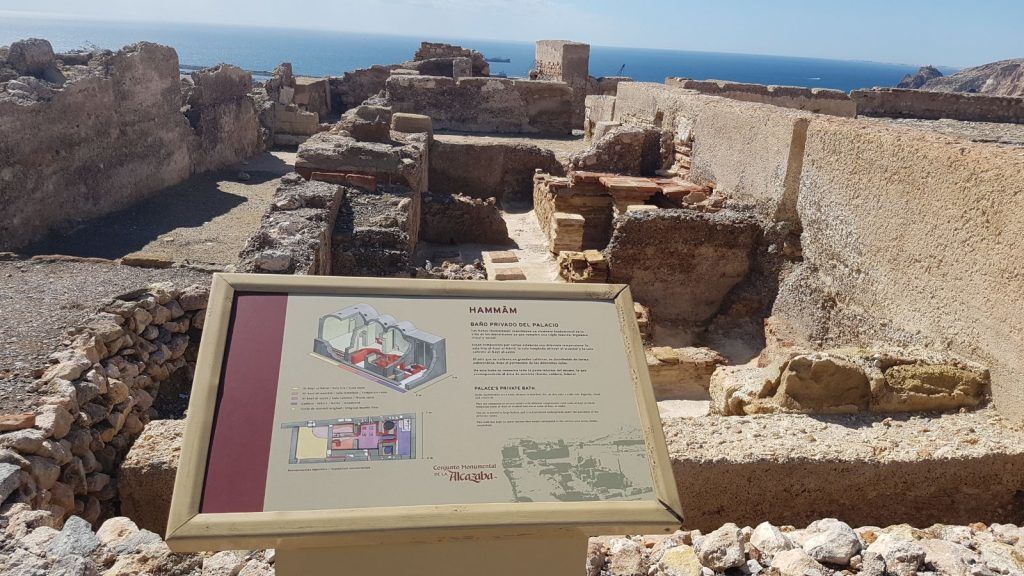 The Hamam Section of the Alcazaba in Almeria 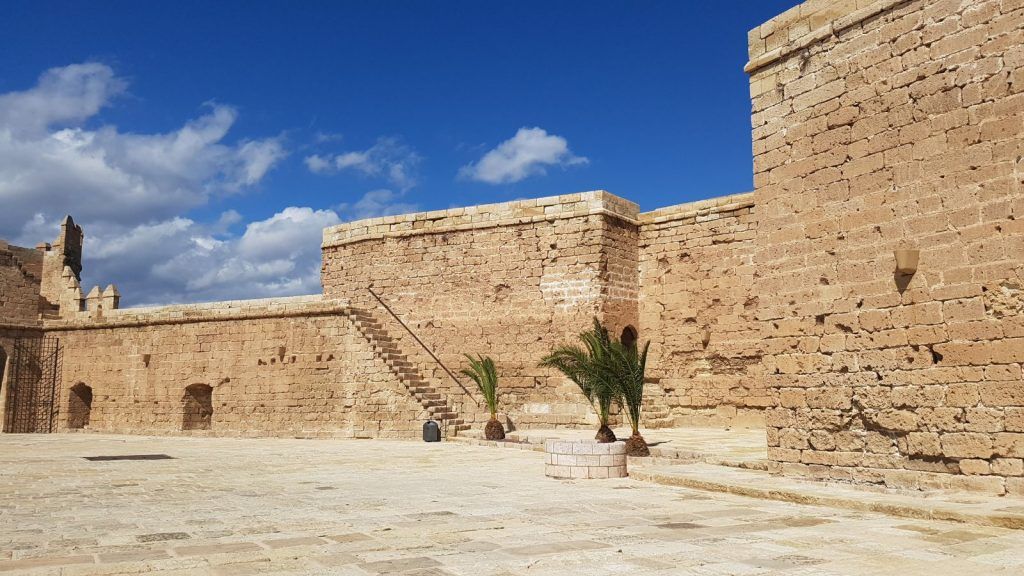 The inner courtyard of the Alcazaba in Almeria 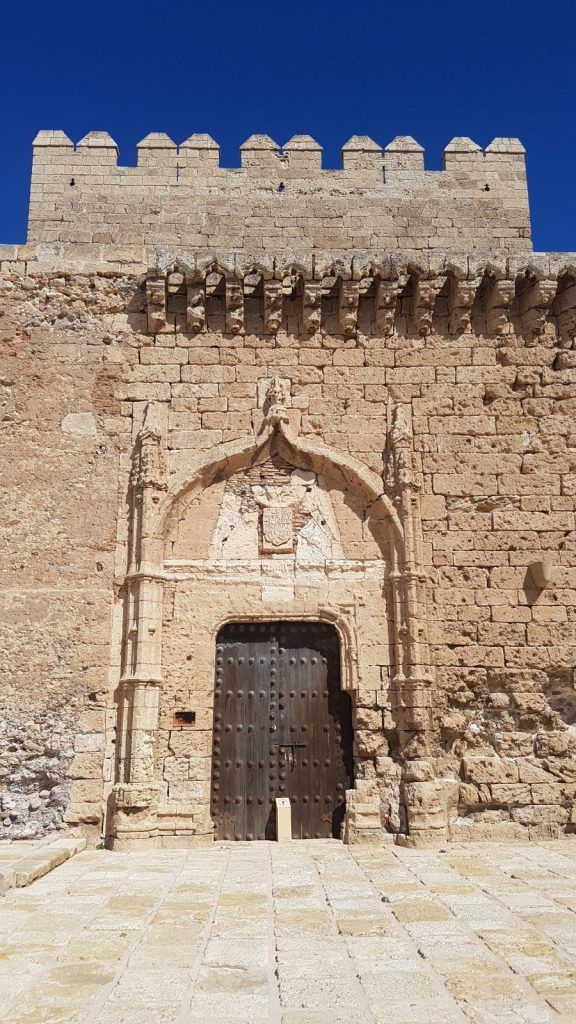 If you are in the Alcazaba and look to the other side, you will still see another old building. This one is the Castillo de San Cristobal and is not as well maintained as the Alcazaba. It was not really clear to us how we could go from the Castillo to the Alcazaba, and we ended up walking through the bushes and a lot of trash!! So maybe do some research before taking off 😉 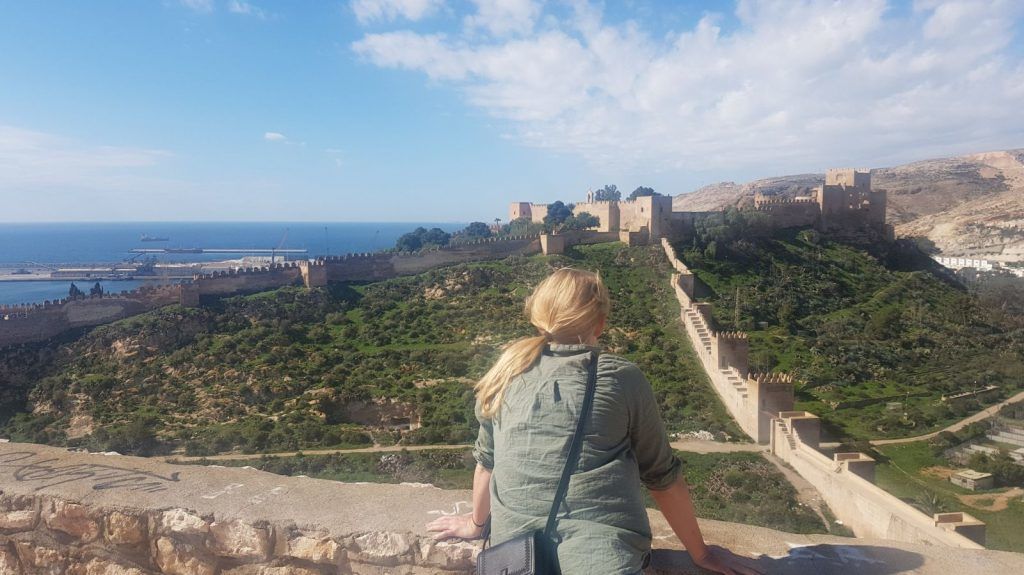 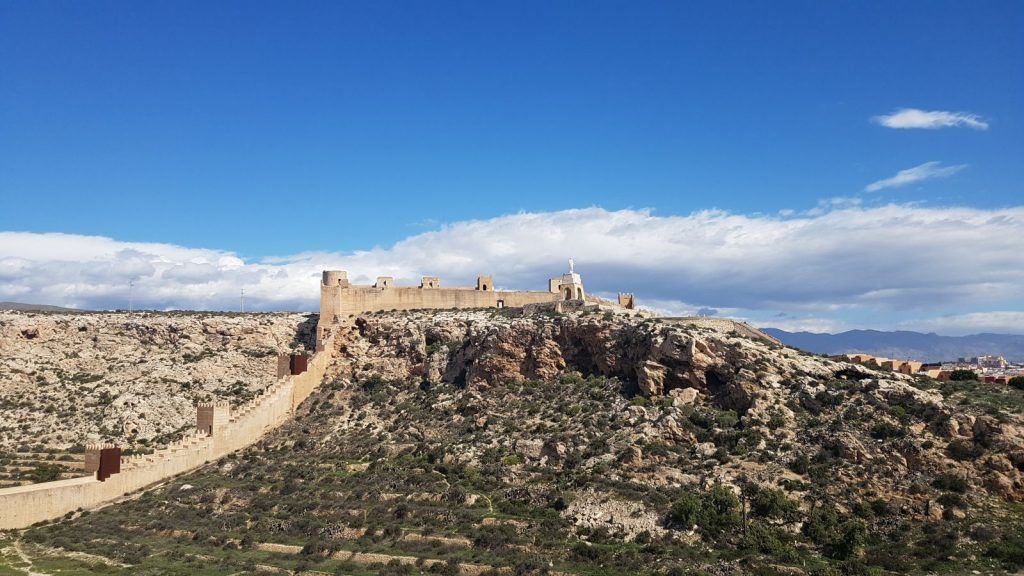 The view to the Castillo San Cristobal and Murallas de Jayran, Almeria

The Alcazaba can be seen from any part of Almeria as it dominates the skyline. Therefore, it is quite easy to find 🙂 Luckily for us tourists, the Alcazaba ofAlmeria can not only be seen, but can also be visited! And a bonus: visiting this awesome historic site is for free for EU citizens and even on a beautiful sunny Sunday, there were no cues! Compare this to the hassle of ordering tickets and the hordes of tourists of the Alhambra of Granada, and maybe the Alcazaba of Almeria bumps up a few spots on your list 🙂 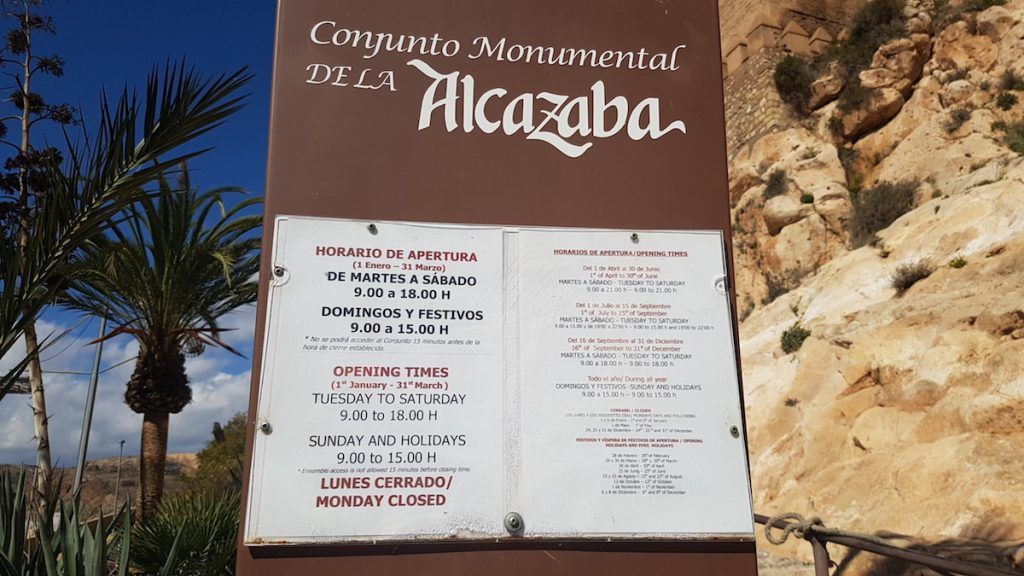 Opening hours of the Alcazaba in Spain in Winter Season

From the Alcazaba itself you will also be treated to impressive views over the port and city of Almeria. For more information about the history of the Alcazaba and details of opening hours have a look at this website.

Movies and series shot at the Alcazaba de Almería

Some epic Western movies were shot in the Almeria region and at the Alcazaba de Almeria itself! In one of the rooms in the Alcazaba, you find a small exposition depicting the movies and series shot here. It’s quite cool to walk around almost feel like you are on a film set :-). You can even visit some actual Wild West film sets in and around Almería!

Arnold Schwarzenegger visited during the filming of Conan the Barbarian in 1982. Lots of outdoor scenes were shot in the Tabernas Desert near Almeria. The Alcazaba was dressed up to film several shots in the bazaar. Later, Steven Spielberg brought along Sean Connery and Harrisson Ford to film the epic Indiana Jones and the last Crusade and also shot in the Tabernas desert and the Cabo de Gata national par. Sean Connery also visited in 1983 for shots of the movie Never Say Never Again.

More recently, even Games of Thrones has visited the Alcazaba as one of the filming locations in Spain 🙂 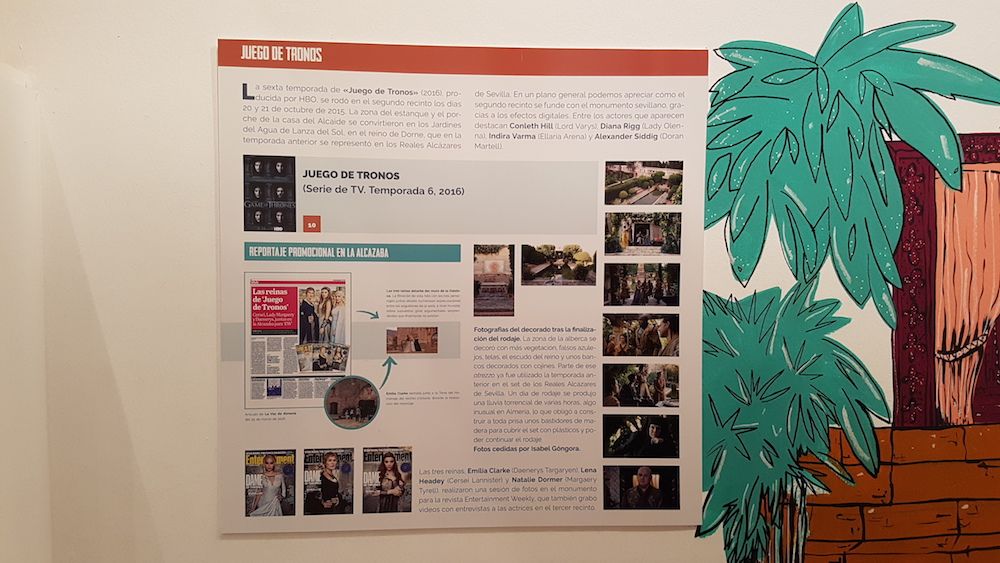 Had your dosis of culture and history? Then let’s head over to the rest of the city 🙂

Other things to do in Almeria

Aside from the amazing Alcazabar there are plenty of other interesting things to do in Almeria. Ranging from tapas to beach to nature, there’s plenty for everyone!

The Cathedral of Almeria

The Catedral de la Encarnación or simply the Catedral de Almeria is a huge six-towered cathedral originally built in the Gothic/Renaissance style. The build started in 1524 and was completed in 1562. Over time, baroque and neoclassical features have been added. Inside you can marvel at the impressive ceiling and view some paintings, vestments and ceremonial silverware. From outside make sure you don’t miss the cute stone lions around the northwest tower. Almost as pleasant as the Catedral itself is the square around it with some pleasant terraces for people watching 🙂 So definitely put this stop on your list of things to do in Almeria! 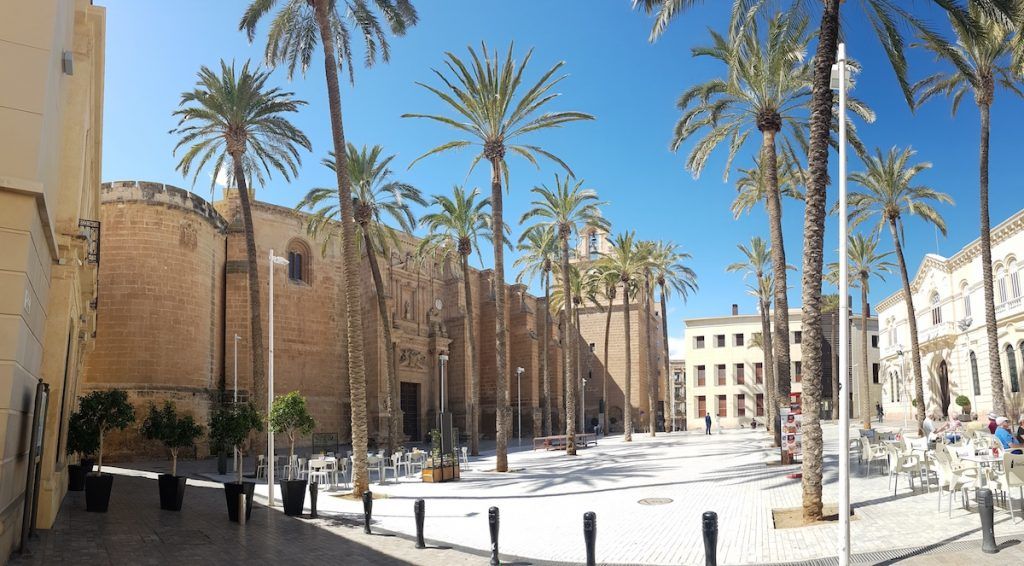 The beautiful square with the Cathedral of Almería

Air raid shelters (or refugios) – during the Spanish Civil War Almería was bombed from both the sky and sea up to 52 different times. This led to the city building air raid shelters to protect around 40,000 civilians. These shelters are more than 4.5 kilometres long, and even protected the people of Almería when they were bombed by the Nazis in 1937. The shelters are now open to the public although guided visits are only offered in Spanish. Entrance fees are €3.

The Plaza de Pavía market is the main market where locals shop for produce as well as things like cheap shoes and churros! It’s open Monday – Saturday but is liveliest on Saturdays if you are looking to immerse yourself in a local experience! We scored a kilo of strawberries for €1,80 and some amazing cheese and sausages! 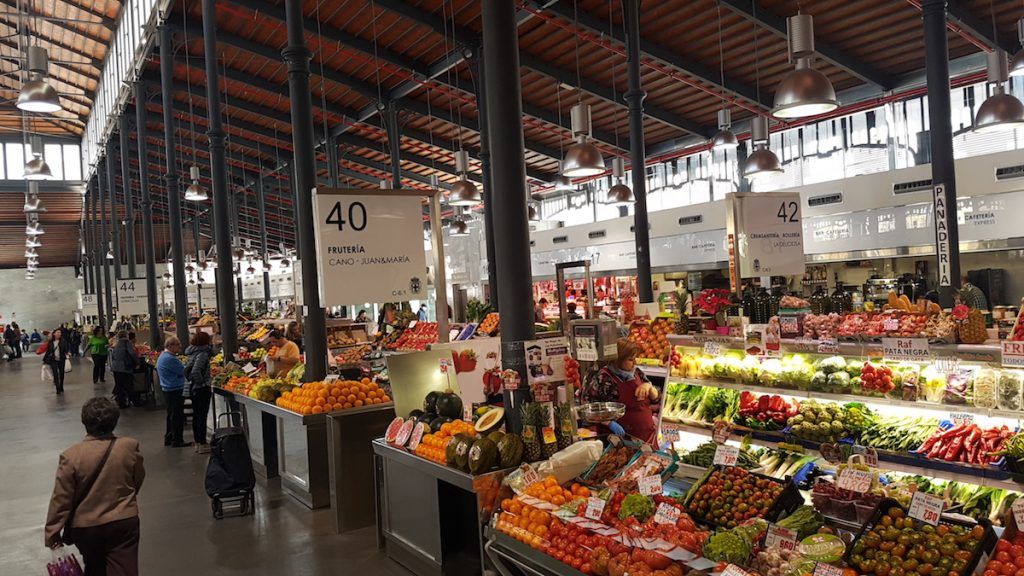 The amazing Mercado Central in Almeria is not a tourist market – it’s an actually cool market where the locals shop!

If you are interested in archaeology and the history of the region then you might want to visit Museo Arqueológico de Almería. It is the largest collection of archaeological remains in Almería and hosts many objects which tell the story of the different historical periods that have shaped the city of Almería.

The guitar museum – for something a little different you could also visit Museo de la Guitarra; a museum dedicated to the history of the guitar and Almerían guitar-maker Antonio de Torres. You can learn all about the interesting history of the guitar. In addition to that, you will see guitar-themed paintings, short films about how guitars are made, and you can even play some guitars yourself.

Still not bored of all the things to do in Almeria? Then you can also visit the statue of John Lennon, simply walk the lovely Rambla or the Cable Ingles. Also, don’t forget to simply sit down, eat some tapas and drink some wine while people watching 🙂 !

Things to do outside of Almería

If you have some time left in this area, there are two thing that could really be worth a trip! Check out Cabo de Gata and the Tabernas Desert.

Visiting the National Park of Cabo de Gata is a highlight of the region! We camped in the park for 3 nights and the beaches and mountains are just stunning. There are tons of beaches and also cute villages to explore. Read all about my visit to Cabo de Gata here and about opportunities to camp right here.

The Tabernas desert is a semi-desert, rocky and sandy area not too far from Almeria. You can visit the scenes of many wild western films shot there. Reviews are mixed but generally positive! There are several sites to visit and different areas to explore.

If you’re travelling by car, I can highly recommend heading into the Alpujarras and the Sierra Nevada to do some off-the-beaten path exploring! Visit for example the town of Trevélez, famous for it’s fabulous Jamón Serrano!

To reach Almería you can fly into the airport which is located only 9 kilometres out of the city. From there you can take a bus into the city itself. Spain’s ALSA bus service also connects Almeria to many regional areas of Andalusia, or even beyond! There is also a train station in the centre of Almería if you wish to travel to and from the city by rail.

We arrived with our own car and although I cannot recommend driving in the city centre and its narrow streets – passing the city on the highway was easy enough!

There are plenty of hotels and AirBnB’s in Almeria. But as we were travelling by campervan and by then really needed a shower, we stayed on a campsite La Garoffa. We went to this campsite because it had a direct bus connection to Almeria and it was right at the ocean!

Pin me for later! 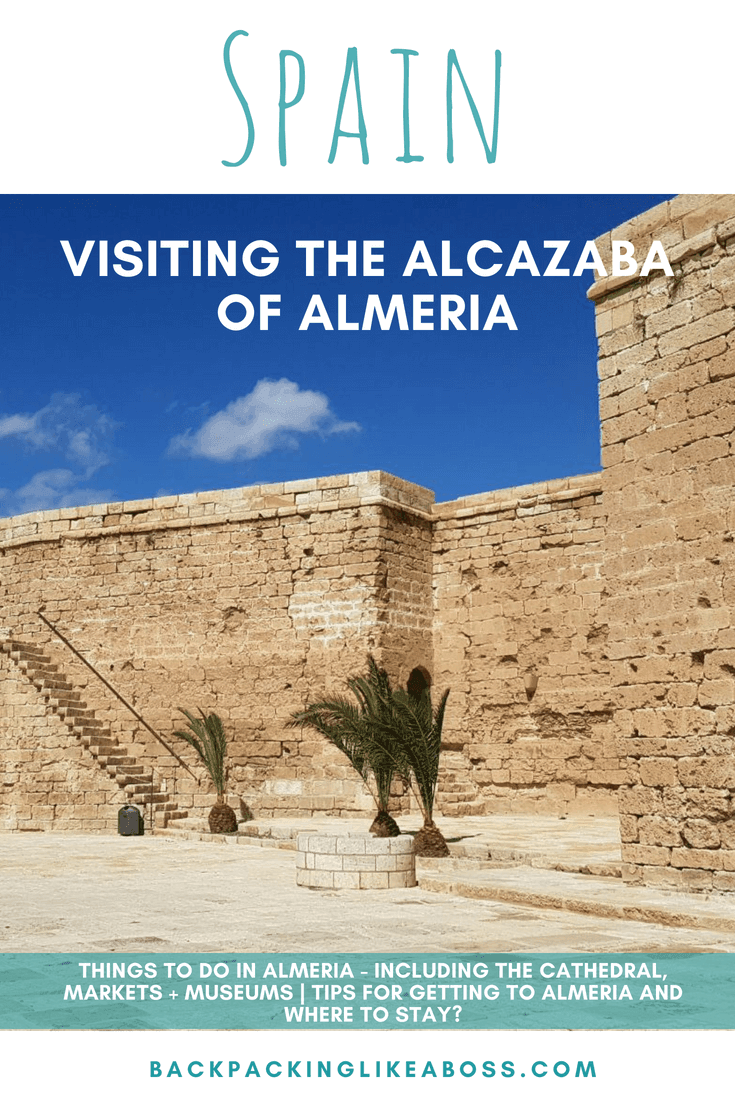 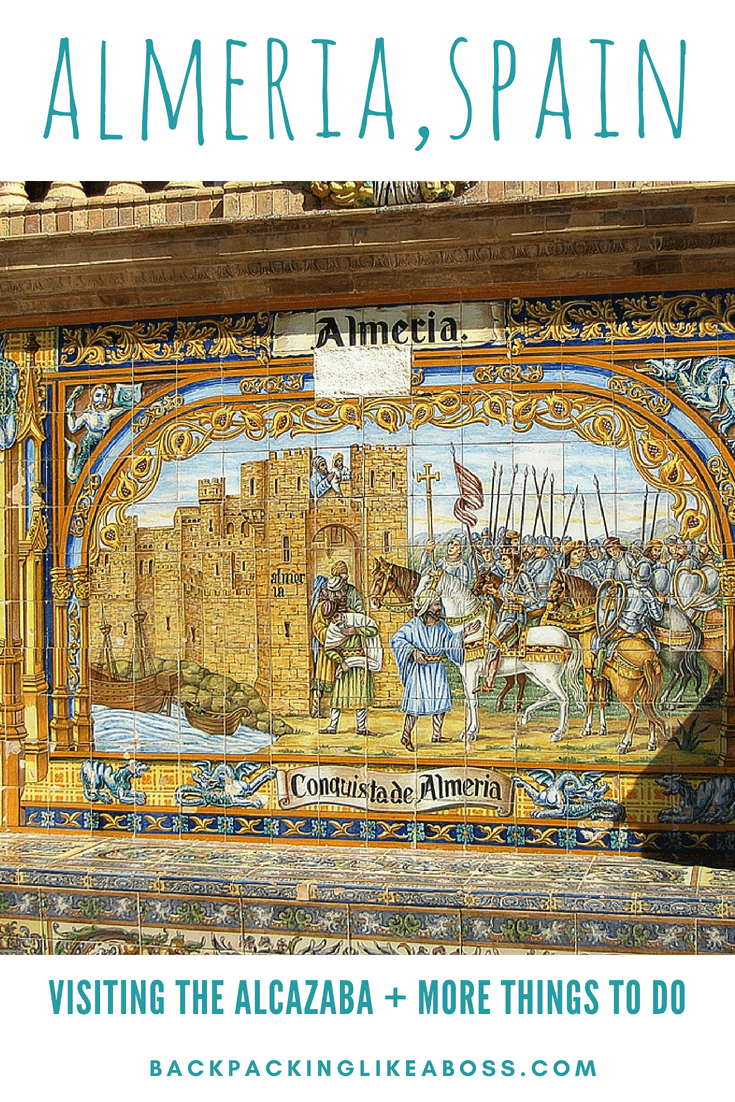 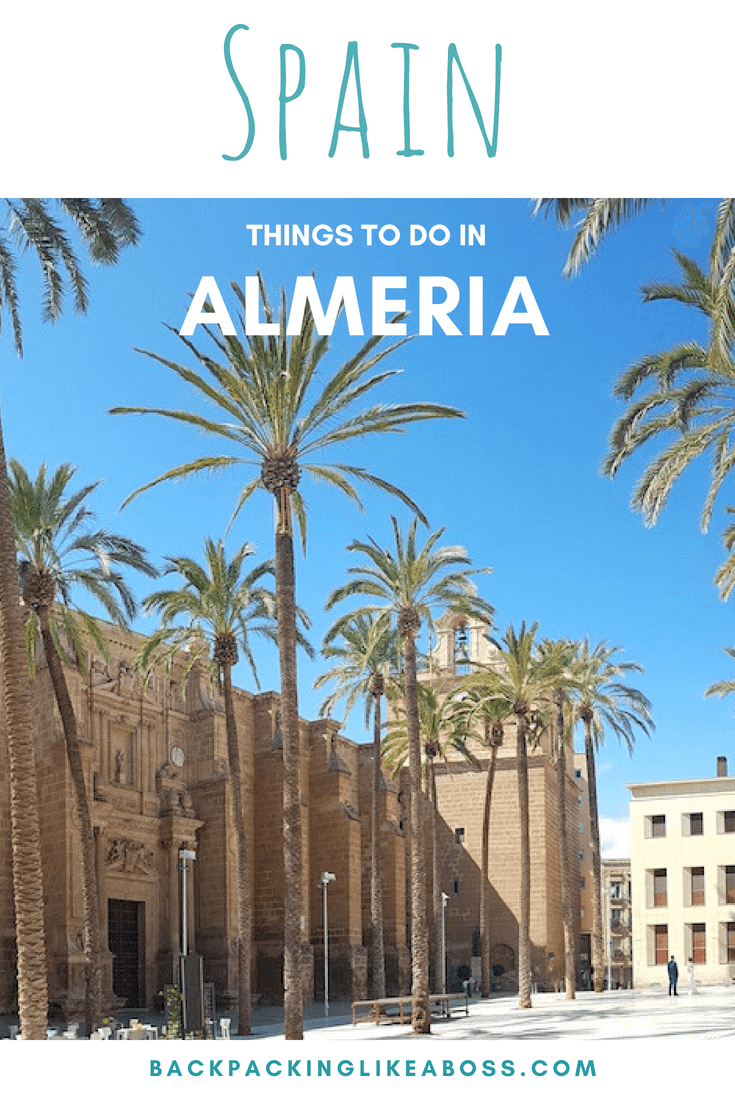